Phoenix-area commuters have no idea what they’re missing when they slog their way along State Route 101, which loops the outermost reaches of the area together. Known locally as the Pima Freeway, it is, except during peak rush hour, among the finest, smoothest stretches of pavement in America.

Behind the wheel of a 2020 Polaris Slingshot, I could have reached out and touched the tarmac as I zipped along at nearly 90 miles per hour. This three-wheeled vehicle – which the feds charmingly classify as an autocycle – comes without a top or doors, and it sits so low to the ground that you might momentarily panic when glancing down.

The Pima is Autobahn-like in its quality, and occasionally in the flow of its traffic on most weekday afternoons. It’s less fun than the winding, motorcycle-ready road I climbed earlier that day to reach rustic Tortilla Flat, nor is it as smile-inducing as the winding closed course called Wildhorse Pass Motorsports Park Polaris set me loose on later in the day.

The Pima is, however, a far more realistic glimpse into ownership of this quirky three-wheeler, mostly because of gawkers whose eyes are seemingly connected to their steering wheels. Like the blue Mazda with Ontario plates driven by an octogenarian who hopefully would have exhibited Canadian friendliness had she actually run me off the road. And the minivan full of middle schoolers who probably should have been in school, anyway.

At least the Slingshot responds adeptly to inputs as I avoid these rubberneckers. It may have two bolstered seats upholstered in vinyl, a grippy leather-wrapped steering wheel, pedals, a touchscreen infotainment display, and two front wheels, but it feels more like a stable motorcycle than a car. A skeleton of a car, at least.

At least the Slingshot responds adeptly to inputs.

This year, the Slingshot discards the initial model’s GM-sourced, charm-free inline-four for a new twin-cam 2.0-liter engine designed by Polaris. You’re not alone in dismissing Polaris as an engine designer, but that’s only because this is the first one the company has created for a vehicle that isn’t a side-by-side or a motorcycle. The new engine runs on premium fuel and makes 203 horsepower at a sky-high 8,250 rpm, as well as 144 pound-feet of torque at 6,500 rpm. That said, the base SL is limited to just 180 hp and 120 lb-ft. Power travels to the single rear wheel via belt drive and either a five-speed manual transmission or a new Magneti Marelli-designed automated manual with a single clutch.

The manual is the one to have with its solid engagement and pleasingly light clutch, though Polaris figures most buyers will opt for the new automated manual that slurs out shifts through five cogs whenever it seems to feel ready. The automated manual will be comfortably familiar to those who have driven the original American-market Smart Fortwo. This is not a compliment.

Unfortunately, those who opt for the gearbox are missing the point, as the Slingshot is a reasonably well-tuned corner carver.

Single And Loving It

The single rear wheel breaks loose at the hint of throttle, though standard traction and stability control systems do an adequate job of taming things. The engine spools up quickly to reach into its powerband, and it screams through the motorcycle-like exhaust. Free of automotive emissions since autocycles fall under federal motorcycle classification, the engine is relatively power-dense and awfully quick considering the Slingshot weighs just 1,650 pounds unladen.

It’s hard to imagine the inline-four working in a passenger car – it rumbles at idle, and needs to rev to get the Slingshot moving – but it’s a charming ruffian that suits the Slingshot’s personality. A new sport mode, accessed by a steering wheel button, provides sharper throttle response, tightens up the steering, and, on automated manual models, holds gears longer. It’s worth a push, but away from the Pima Expressway and back on city streets, the gearbox clunked off sloppy gear changes as I rolled toward Wildhorse Pass.

It’s hard to imagine the inline-four working in a passenger car, but it’s a charming ruffian that suits the Slingshot’s personality.

Not many Slingshot owners hit the track, but they should. The lightweight machine has an amazingly low center of gravity, and its steering has good heft and decent road feel considering the Kenda tires are fairly hard. By most common metrics such as grip, steering feel, and confidence, the Slingshot is far from precise. But it is hugely entertaining.

The single rear wheel means that transitions take some getting used to in hard cornering. The rear end comes around quickly since there’s not that much hanging out back there. Slingshot Rs have a 20-inch forged wheel shod with an ultra-wide 305/30R tire. The less-powerful SL makes use of a 255/35 version of the tire that’s far more likely to let go. It doesn’t take much practice to learn how to drift the Slingshot through sweepers. A 305-width rear tire with a symmetrical tread pattern is virtually nonexistent, which is why Polaris had to seek out Kenda rather than, say, Michelin. Given the rate at which tread disappears after a few laps of drifting, though, Michelin might have a business case for sponsoring a spec Slingshot series.

Compared to last year’s Slingshot, the more powerful engine ups the chassis’ limits considerably. It’s not hard to overdrive the Slingshot, with the three tires squealing in protest. Precise, the Slingshot is not, but it is hugely entertaining. You could peel the doors off of a Mazda MX-5 Miata and chop its windshield down for an equally visceral experience, though the incessant “door ajar” bings might be the least of your concerns.

This quirky, attention-grabbing three-wheeler delights in its throwback viscerality compared to performance cars so refined that they could almost be driven around a track with cruise control engaged.

The obvious downside is just how much the Slingshot costs: Polaris asks $26,499 for the base SL, which can only be had with the automated manual. The $30,999 stick-shift R with its uprated brakes, more powerful engine, wider rear wheel and tire, and a few other items makes for an expensive toy. That’s range-topping Miata Grand Touring money.

Then again, few bystanders will give a Miata a second glance, and that, for better or worse, is what Slingshot ownership is all about. 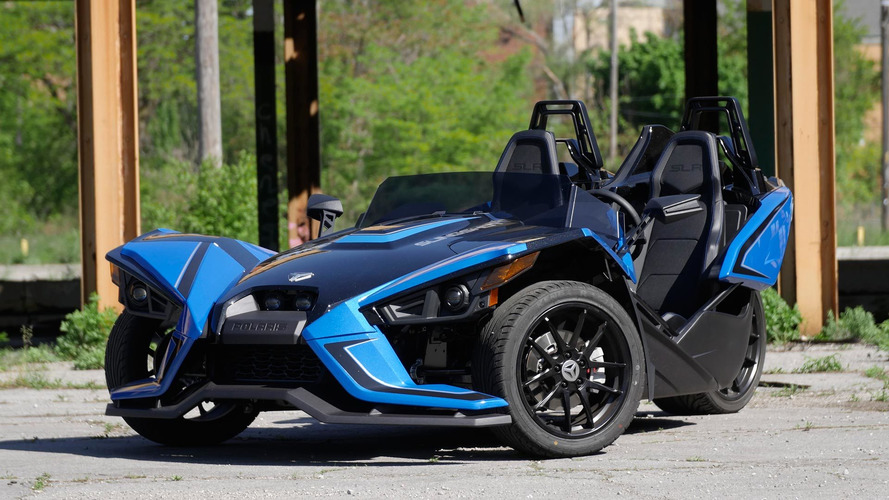