We often make the mistake of measure vehicles by the numbers they achieve and not the feelings they produce. But even in a numbers-forward supercar world where supercars have become overly clinical, there remains a handful of cars that haven’t lost their emotion en route to ridiculous performance targets. Enter the 2020 Lamborghini Huracan Evo Spyder, equal parts performer and entertainer.

The Evo is an important new chapter in the Huracan story. Following the LP610-4, LP580-2, and Performanté, it drops the LP (short for "longitudinale posteriore") moniker from its name and adds both new driver tech and styling updates as part of the Huracan’s mid-cycle refresh. These tweaks make the Evo a much more refined, more sophisticated car – and much better to drive than any of its predecessors. Tack on the word Spyder and a retractable soft top replaces the fixed roof.

Spyder or Stunner? Both.

Even as a stationary object, the Evo Spyder puts on a show. Parking it on a suburban street outside Los Angeles created a tractor beam-like effect on nearly every kid in the neighborhood. They gawked at its presence, excited by the sparkling blue Italian convertible among the myriad crossovers and economy cars. And for good reason – the Blue Sideris metallic paint job and cutting angular design command attention.

Though it doesn’t stray too far from the original Huracan’s looks, the Evo Spyder employs new tricks that give it five times more downforce than before. Credit the aggressive new front bumper, with its revised front splitter and larger air intakes, for the added function. The new mug is decidedly busier than the pre-facelift Huracan, but it's also more fierce, as Lamborghini design should be. And speaking of “facelift,” this example includes the $4,000 optional nose lift, which should be standard kit. Especially in suburban L.A.,the system saved the Lambo’s chin from all sorts of bad driveway encounters.

Though it doesn’t stray too far from the original Huracan’s looks, the Evo Spyder employs new tricks that give it five times more downforce than before.

From the side, the Evo spyder looks best with its top stowed beneath the rear decklid. There’s nothing visually unappealing about the vehicle with the top up, but it breaks up the body lines –and, c’mon, you’re buying the Spyder for a reason. The best design update is the Evo’s modified rear end, which includes two center-mounted exhaust tips, inspired by the Performanté, and a subtle-but-tasteful spoiler.

Even without a drastic shake-up over the prior car, there are enough small additions to declare the Evo an improvement. In terms of coupe versus Spyder, however, there is one very obvious sacrifice in losing the roof. Instead of a glass showcase, the artful V10 lives beneath a panel, hidden from the world. It’s a sacrifice I’m willing to make for endless sunshine and added noise.

Much like the exterior, the cabin is similar to the pre-refresh Huracan, with one major difference. Lamborghini stripped the center console of its many buttons and added an 8.4-inch touchscreen in its place to supplement the digital driver display. The new touchscreen displays the car’s driving data and other functions like climate controls. It’s not the world’s greatest infotainment screen, with an occasional propensity to ignore inputs and scroll past the desired location. But it’s mostly intuitive to work with, and even offers Apple CarPlay (Android Auto is not available). Otherwise, the Huracan retains the rest of its interior layout – including the console-mounted start/stop button, which catapults the engine from hidden treasure to center of attention.

Hearing a naturally aspirated V10 come to life in the year 2020 is a rare treat and one that shouldn’t be taken for granted. Amid rumors of hybridization in Lamborghini’s not-too-distant future, the Evo’s 5.2-liter V10 might be the last of its kind. If this is the case, then this is one hell of a finale. Derived from the Performanté, the Evo’s engine produces 640 horsepower and 442 pound-feet of torque. More importantly, it revs to a sky-high 8,000 RPM, emitting a cacophony of mechanical noises along the way. Lamborghini even includes a button on the dash to drop the small rear window, which floods the cabin with the engine’s soundtrack, even with the top still up.

Everything about the Evo’s character begs you to keep the top down, however, which is exactly what I did during my week in L.A. – messy hair be damned. Just like before, there are three driving modes to pick from: Strada, Sport, and Corsa. Each one makes the Evo incrementally more lively, and a bit louder, too. Thankfully, not even the track-ready Corsa setting is too much to bear on public roads. Rather, the Huracan offers “is-this-really-a-supercar” comfort levels around town. Its magnetic suspension dampers soak up many of the road’s imperfections, which makes driving the Huracan at everyday speeds a real delight. The only gripe against the Evo spyder as a cruiser are its seats, which are rail-thin and unsupportive for a car that will spend much of its life along Pacfic Coast Highway, rather than around Laguna Seca.

If you do find yourself on a stretch of road away from the city congestion, the Evo’s personality transforms in the best way. Along with the revised engine, Lamborghini went to town improving the Huracan’s driving dynamics. There’s a new torque-vectoring system to manage power between the wheels and a new rear-wheel steering system adopted from the Aventador S. In practice, the latter helps the Evo turn in with extraordinary quickness through the bends. Learning to cope with the car’s borderline-frantic reflexes around corners comes over time. But the more I drove it, the better it felt. In my relatively short supercar career, only has the McLaren 720S shown quicker reaction time while canyon carving.

The difference between the two exotics is a matter of confidence – the Huracan feels more manageable than the McLaren. This is most likely a product of the two things. The McLaren uses a rear-wheel drive setup, while the Lamborghini sends power through all four wheels, which makes it more stable, especially exiting turns with a boot full of throttle. More importantly is the Evo’s most comprehensive piece of driver technology, called Lamborghini Dinamica Veicolo Integrata (LDVI). Charming Italian name aside, the system is a collection of sensors located throughout the vehicle, working together to make the car predict outcomes before they happen. As it constantly calculates metrics like speed, steering input, and grip levels, LDVI proactively works to keep the Evo’s behavior in order but does so without any negative effect on the driving experience. At most, there’s a vague sensation of the system working around corners to combat understeer at high speeds, but even then it’s never a nuisance.

And while we’re on the topic of driving experience, the Evo deserves a hat tip for not sacrificing its personality in the face of new technology. There’s a palpable feeling of fun the car provides each time you get behind the wheel thanks to the masterful V10. The the charm of pushing a turbo-less, high-revving engine that has me smitten with this topless bull. Not to mention, the simply euphoric noise it produces, enhanced greatly by putting the car in al fresco mode.

Yes, the Huracan Evo has flaws: the seats feel stiff during long stints, it’s incredibly difficult to see out of (top or down), and the new infotainment system isn’t nearly as smooth as it could be. And even with those concessions, the Huracan Evo Spyder still seems like a winner at it’s near-$300K price ($287,400, to be exact). McLaren offers the razor-sharp 600LT Spider, and Ferrari has the elegant 488 Spider, each for similar money. While I can’t fault purchasing either of those alternatives, the Lamborghini offers a bit more flair that isn’t quantifiable on paper. And with highlights such as its more liveable reworked suspension and LDVI driving technology, the Evo Spyder is a thoughtful update to the Huracan that nails just about everything a droptop supercar should. 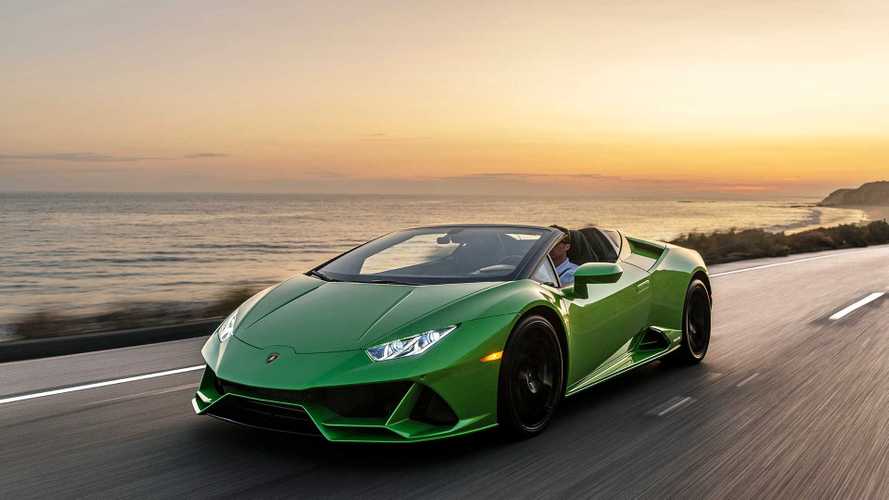