A dominant force in a dying segment.

With the current success of crossovers and SUVs, minivans don't dominate the market like they once did. But the 2019 Chrysler Pacifica is a minivan worth considering.

The Pacifica is a stylish and spacious alternative to the traditional SUV, with an available plug-in hybrid powertrain (like the one tested here) that offers up to 30 miles per gallon on the highway. You might want to cross that crossover off your list and consider a Chrysler Pacifica Hybrid instead.

The Pacifica plug-in is the first and only hybrid minivan on sale in the States. With a naturally aspirated 3.6-liter V6 and a 16-kilowatt-hour battery pack powering a pair of electric motors, the Pacifica produces 260 horsepower and can drive up to 32 miles on battery power alone (but more on that in the next section). That hybrid setup yields a return of 80 MPGe, or 30 miles per gallon combined, besting every other minivan in the class.

The Chrysler Pacifica PHEV can drive up to 32 miles on battery power alone (though, there’s no dedicated EV mode). That's better than almost every comparable plug-in crossover on sale. Only the upcoming Toyota RAV4 Prime (39 miles) is better. Pair that with a 16.5-gallon fuel tank, and the Pacifica Hybrid offers a total of 520 miles of total driving range – more than 100 miles better than the next-best gas-powered Pacifica.

Even with the addition of a floor-mounted battery pack, the Chrysler Pacifica Hybrid isn't lacking space. The Pacifica's massive 140.5 cubic feet of maximum cargo capacity nearly matches that of the Honda Odyssey (140.7 cubic feet), and its 165 cubic feet of passenger volume bests the Honda (160.1) by a few cubes.

Save Thousands On A New Chrysler Pacifica

The 2019 Chrysler Pacifica Hybrid starts at $40,245. Versus comparable crossovers, the base Touring Plus model isn't that expensive. The range-topping 35th Anniversary Limited edition, though, is the priciest of the bunch, asking $46,490. Our tester – a Limited model with the optional S Appearance package ($795), the advanced safety package ($995), and the panoramic sunroof ($1,795) – tops out at $50,875 after options. The only reprieve for customers is that the Pacifica Hybrid is eligible for a $7,500 tax credit from the federal government, which brings the price down significantly.

The Pacifica Hybrid uses the same 3.6-liter V6 from the standard Pacifica. Only here that engine runs on the more efficient Atkinson cycle and uses an electrically variable transmission instead of a nine-speed automatic. But even with two electric motors, the V6 is loud and clunky. Attempting to get the minivan up to speed yields unpleasant sounds from under hood, audible from all three rows.

Because of the floor-mounted battery pack, the Pacifica Hybrid loses one major feature that gives the pure gas-powered model a slight advantage: Chrysler’s signature “Stow ‘N Go” storage. Rather than being able to fold the second row of seats into the floor, you have to take them out entirely. The Pacifica Hybrid also loses the “Stow ‘N Vac” vacuum in the trunk. 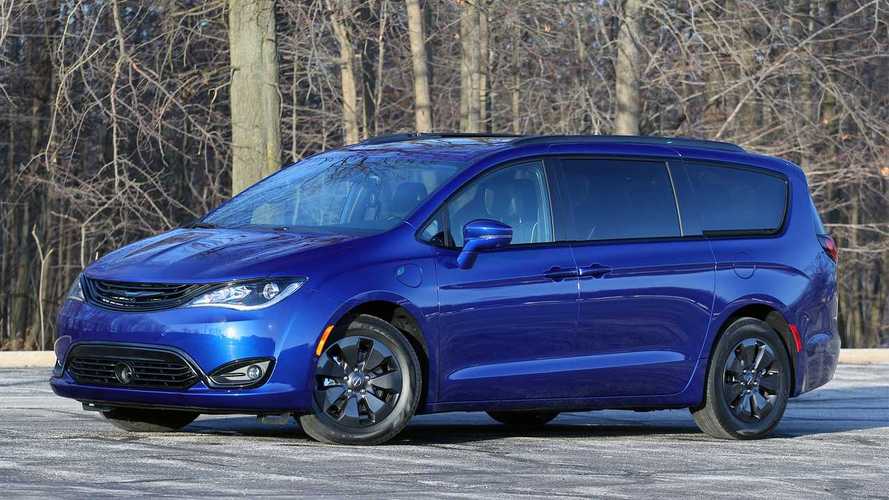